Discovered on the steps of the church as a baby, young Father Jamie Ignatius, raised by nuns, now preaches in his only home since birth. Lately, in prayer, asking the burning question of his life, “Who am I, Father?” he has experienced horrifying visions of murdering the people he loves.

Soon Jamie begins to have waking visions of a tall figure wrapped in burial linens — its face an image of his own! Fearing for his sanity, he seeks help from beautiful Maureen Sullivan, a woman he feels strangely, erotically drawn to. A student of parapsychology, she hypnotizes Jamie and guides him back to his past lives. They discover that she is his love and that Jamie is Judas Thomas, the main believed to be the twin brother of Jesus, who betrayed him to the authorities before his crucifixion. Jamie believes he has been reborn again and again to atone for his crime, and Maureen must agree when she sees a photograph of the Shroud of Turin, believed to be Jesus’ burial cloth, and the face of the crucified man is Jamie’s!

In a shattering climax, the shrouded figure leads the entranced Jamie deep into the cathedral’s crypt and toward his only chance to redeem his soul…. 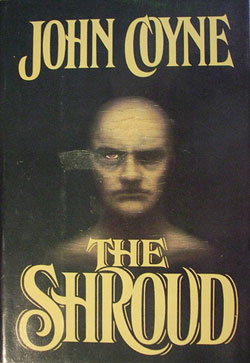