The Man Who Brought Golf to Chicago and America

In the closing ceremonies at the 2012 Ryder Club held at Medinah Country Club it seemed as if everyone in Chicago was thanked for staging, attending and promoting the sports event in Illinois. But, in my opinion, perhaps the most important person in Chicagoland golf wasn’t even mentioned at any of the ceremonies, though he had a direct connection to 1) golf in Chicago and 2) Scotland, the site for the 2014 Ryder Cup to be held at the Gleneagles Hotel in Perth & Kinross, Scotland. Not only did this man first learn the game as a teenager at golf’s historic St. Andrews, he was the person most responsible for the game being played in the Mid-West before the turn of the last century…………. Charles Blair Macdonald.

Macdonald was born in 1855 and raised in Chicago, but he learned the game as a student at St. Andrews University in Scotland. He was, in fact, taught the game by Old Tom and Young Tom Morris. Later, in the early 1890s, he would help organize the Chicago Golf Club, the American Golf Association, and in 1895 win the first official U.S. Amateur Championship. He is rightly claimed as the Father of American Golf Architecture. Indeed, ‘Golf Architecture’ was a phrase coined by Macdonald himself. 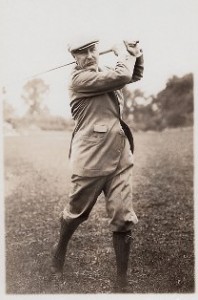 Macdonald was the son of a wealthy Chicagoan. At sixteen he was sent to Scotland to earn his college degree. There, his grandfather introduced him to Old Tom Morris, bought him a few hickory clubs, and got him a locker in the pro shop as juniors (like the golf pros) were not allowed inside the Royal and Ancient clubhouse. Soon, Macdonald was spending all his time in the Morris’ pro shop, listening to tales told by the pros, and playing the game with seven woods and four irons. He carried a driver, a grass club, the middle spoon, a short spoon (a baffy), a wood niblick, a mid-iron, a lofter, an iron niblick, and a wooden shafted putter.

Macdonald’s years at St. Andrews were filled with school and golf–The University is less than a wedge from the club house–but when he returned to Chicago in the fall of 1875 there was no golf; no place to play. Once, when a Scottish classmate visited they started to talk, as all players will, of matches played and won, and then hunted up some of Charles’s old clubs and went out onto an old Civil War campsite, and as Macdonald wrote, “we cut in a few holes and utilized some old tin cans left behind by the troops years before.”

Macdonald was only able to play golf on a real course when he traveled on business to Europe.

It wasn’t until 1888 that golf finally made it to America, and to Yonkers, N.Y. The game then travelled to Lake Forest in Chicago. It was in the spring of 1892 that Macdonald designed a 7-hole ‘golf course’ on the lawns of the home of Senator Charles B. Farewell. The course was built  for Chicago’s World Columbian Exposition of 1893, and the arrival to the city of young college men from England who played the game.

That summer of ‘92 MacDonald would also lay out the 9-holes of the Chicago Golf Club in Belmont, Illinois and, the following spring, add another 9-holes to make Chicago Golf the first 18-hole course in America. From those ‘humbling’ beginnings, Macdonald by 1901 proclaimed himself: Father of American Golf Architecture.

With friends Macdonald bought 205 acres in Sebonac Neck, Southampton and began to design National Golf Links of America. He wanted to build a course in the style of the British links, with the “strategic interest, playability, and charm of the Old Course at St. Andrews,” writes Tom Doak in his Foreword to George Babto’s wonderful, The Evangelist of Golf, The Story of Charles Blair MacDonald. And that is what he did. As Geoff Shackelford writes in Grounds For Golf: The History and Fundamentals of Golf Course Design, “he took concepts proven in the British Isles…and allowing those classic design ideas to be recreated…using proven ideas effectively while adding his own distinct twists.”

It would take until 1911 before the National Golf Links officially opened, but Macdonald continued to tinker with the course, moving bunkers, tees, and even greens through 1929. In 1939, he died at the age of 83 in Southampton, close to his masterpiece. Through all those years he was also a central figure in codifying the rules of the game with the Royal and Ancient and the American Golf Association, later renamed the United States Golf Association.

No, they didn’t remember him at the Ryder Cup in Chicago, but perhaps in 2014, back in Gleneagles, Scotland where this game all began, and where C.B. Macdonald first learned to play with a baffy and a niblick, they will.