From the acclaimed bestselling author of The Piercing comes a terrifying novel in which a woman’s anthropological studies of a mountain community reveal a dark and nightmarish secret. Just as tourist season ends, the hunting season begins. . .

Short description
April Benard wanted a summer home in the Catskills. As a wife, mother, and step-mother, she thought getting away from the hectic city for a few months would be good for her family. As an anthropologist, she thought that studying the inbred locals who lived in the Mad River Valley would be good for her career. What she failed to realize is that these strange people would be studying her too …

GoodReads.com Reader Review
YOU DON’T GO ALONE INTO MAD RIVER MOUNTAIN… Everything would be okay in the country, thought April Bernard, in her new summer home.Here her children would be happy and safe, and she could spend time with the man who had saved her life and given her love. Here she could further her career by researching a clan of remote inbred hill people, living in their own isolated world. She had nothing to fear in Mad River Mountain… Nothing that is until the creatures she was studying strayed from the dark woods.Horrible beings with stunted bodies, pumpkin faces, deformed in flesh with a thirst for hot blood. Tourist season is over, hunting season has begun…~AN INCREDIBLY ORIGINAL AND TERRIFYING BOOK~BE PREPARED TO LOOSE SOME SLEEP OVER THIS ONE!
— Aaron-{{Everlast}}-Rebel Leader rated it 3 of 5 stars Nov 23, 2013 Recommends it for: Fans of horror and suspense 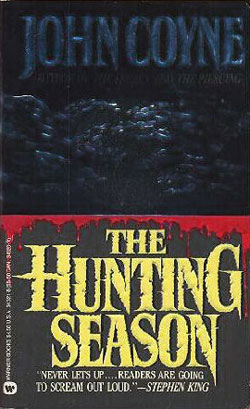