The Caddie Who Knew Ben Hogan

Returning as an honored guest to the exclusive country club where he caddied in his youth, Jack Handley remembers the summer of ’46 when he caddied for the legendary Ben Hogan. Now a respected and elderly historian, Jack recounts to the assembled sons and daughters of members he once knew the tense and dramatic match between Hogan and the young club pro he idealized as a 14-year-old caddie.

The author fills his narrative with true-life anecdotes about Ben Hogan and this golden age of golf as he profiles an assistant club pro who loves the game as much as he loves the beautiful daughter of the president of this private club. At the end of a magical summer, the club pro will win and lose at golf and love, and the teenage caddie will learn lessons for life taught to him by one of the great gentlemen and players of the game, Ben Hogan.

A timeless, and heartwarming tale, The Caddie Who Knew Ben Hogan is for all readers who love a great story, written by a novelist who loves language as much as he loves the game of golf. 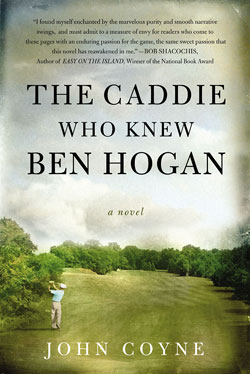