Review of ‘Long Ago and Far Away’: A Novel Set In Ethiopia by John Coyne 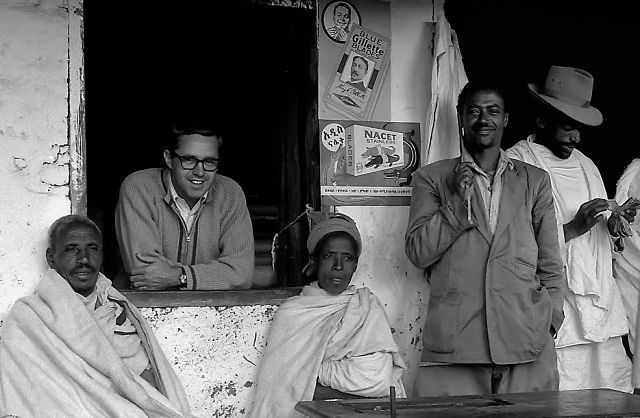 John Coyne, pictured above in Addis Ababa in 1964, is the author of the new novel ‘Long Ago and Far Away.’ Coyne served as a Peace Corp Volunteer in Ethiopia from 1962 to 1964. (Photograph by Michael McCaskey)

New York (TADIAS) — Author John Coyne was one of the first batch of Peace Corp Volunteers sent to Ethiopia in 1962 where he taught at the Commercial School in Addis Ababa. Since then Coyne, who currently lives in New York, has re-connected with several of his students who have come to America. His most recent (13th) novel entitled Long Ago and Far Away uses Ethiopia as the cultural environment for a love story between two young Americans – a spy serving as a diplomat and a journalist commissioned to produce a tour guide of Ethiopia in 1973. The plot spans a period of 40 years, and goes back and forth in time and place between Ethiopia, the United States, and Spain. Interspersed with mention of historical books written about Ethiopia Coyne also includes a lesser talked about scenario where individuals related to the royal family had been restricted in their movements due to their suspected participation and support of an earlier attempted coup against Haile Selassie.

As the narrator, Parker Bishop, starts the novel with a criminal trial involving a Peace Corp Volunteer’s death he provides a glimpse of the months preceding the uprising of the army that overthrew Emperor Haile Selassie. Coyne depicts the tension in the air surrounding the secrecy of a looming drought in the north of the country and brewing political instability, as well as the explorations of a foreign (ferenji) narrator who is not a complete outsider as he is familiar enough to communicate in the Amharic language. Yet these images that have become so stereotypical of the nation are swiftly challenged with Coyne’s perceptive descriptions of the conditions that ordinary people lived under in rural parts of Ethiopia, the beauty of small moments such as driving on highland roads enveloped by the bloom of Meskel flowers after the annual Summer rainy season, or sharing a cubaya (cup) of tea brewed in a tukul house in Fiche. It’s easy to feel Coyne’s magnetic pull to the land and its people and anyone who has ever spent time in Ethiopia may be instantly catapulted into a sense of nostalgia for the contradictions and uniqueness of the experience.

Long Ago and Far Away is a novel written with great love of Ethiopia and its essence stays with you long after you have finished reading the last words the lovers say to each other.

—
You can learn more and purchase the book at johncoynebooks.com or at amazon.com.