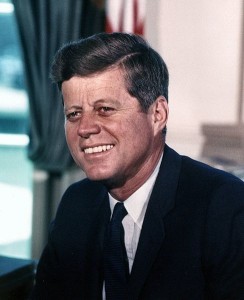 TIME Magazine in their July 2, 2007 issue features JFK with the cover line: What We Can Learn From JFK. It is the 6th Annual Making of America Issue of the magazine. Now, Richard Stengel, the Managing Editor, writes in his note to readers, “With the U.S. in a pivotal moment similar to the one in 1960, we take a hard look at Kennedy and his legacy.” That said, I’m happy to add TIME also used a page [64] to write about JFK the golfer.

That page was written by Van Natta, author of First Off the Tee: Presidential Hackers, Duffers, and Cheaters from Taft to Bush. Van Natta says Kennedy was the best of the presidential golfers, shooting an average score of 80 for a full 18 holes. That would give him an 8 handicap, [if par was 72] which is pretty good for a sitting president.

Kennedy kept secret his passion for the game and often when he would disappear from the WH on summer afternoons the press assumed he was off on one of his extramarital affairs when actually he was playing golf at Chevy Chase or Burning Tree. When the rumors of his assignations began to surface to the general public, Pierre Salinger, JFK’s press secretary, admitted Kennedy was playing golf.

Kennedy, of course, didn’t want to be seen as another Eisenhower with a putting green on the back lawn of the White House [not a bad idea, I think] so he kept secret his love of golf.

However, he couldn’t keep himself from getting help from a pro. Natta tells how the only good film we have of Kennedy playing golf is an 8-mm taken of Kennedy on the links in Hyannis Port. The film, by Cecil Stoughton the White House photographer, shows what a fine, natural golfer Kennedy was. JFK wanted the film so that he could send it to Arnold Palmer. Kennedy wanted Arnie help with his game, and had invited Palmer to the White House for dinner and a golf lesson. Palmer was planning on visiting Washington and Kennedy in early December 1963, right after Kennedy’s got back from Dallas.