Excerpt from The Caddie Who Won The Masters 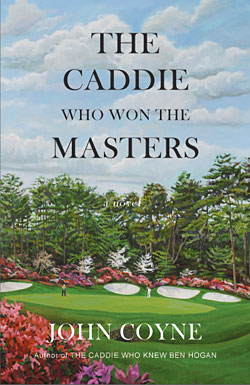 A player never wins the Masters on his own, as those of us who follow golf know well enough. But in all honesty, when I look back at my week in Georgia, I don’t know which one of those golfing legends helped me the most. Of course, my caddie played a part—that young kid who showed up out of nowhere to carry my bag. And certainly Kerry had more than her share of influence on how it all turned out.

Golf writers pointed to what occurred on the third round at Amen Corner, saying that was the turning point. Yet the truth is, so much more had happened to me before that afternoon out there at the far end of Augusta National that I can’t say my eagle on 15 was the decisive moment. Even though it was there—on the back side in the third round—were my game turned around in the fading sunlight of moving day, as Saturdays on tour are called, and I came into contention.

In retrospect I know that what transpired up in the Crow’s Nest of the clubhouse before the tournament was more important than any shot I made at Augusta National.

So when I put into place the bits and pieces of my time in Georgia, as if they were some sort of mythological mystery, all I can say for certain is that my life began to subtly shift the moment I stepped off the Washington Avenue bus at the front gate of Augusta National Golf Club on the Sunday afternoon before the opening round. I realize now I wasn’t in control of my own destiny that week, but, of course, others who have played the Masters have also said as much.

I do know that on that first day I looked more like a forty-year-old caddie than a player, standing there at the bus stop with a suitcase in one hand and my clubs slung over my shoulder. I was a wrinkled, unshaven mess, wearing baggy pants, beat-up New Balances and a golf cap jerked down on my uncombed, thick, salt-and-pepper hair. Anyone who was watching—though no one was—would’ve taken me for one of those old-time loopers who travel from club to club hoping to grab a bag and earn a few bucks to buy another bottle of booze. What separated me from the caddie yard were my sticks. One glance in my bag would have told any player that even if I wasn’t first class, at least the clubs were.

I stepped across the wide street and said hello to the uniformed Securitas guards standing in front of the white-brick gatehouse. I told them my name—Timothy Jack Alexander—and that I had come to play.

Cars filled with players, officials, reporters, and members of Augusta National were slipping by me at the entrance. The cars slowed, the people inside presented credentials, then they were waved ahead. The sleek automobiles rode smoothly under the speckled sunlight filtering through the canopy of those ancient magnolia trees that stretch from the gates up the famous drive to the white-columned plantation manor house.

I showed the guard my invitation. Every year, the winner of the U.S. Mid-Amateur is offered a chance to play in the Masters, and having won the tournament, this was my year. The letter was signed by Billy Payne himself, the chairman of Augusta National.

Next the guard wanted me to prove that I was really Timothy Jack Alexander. I showed him my Southern Illinois University faculty ID, with the mug shot of me looking as if I had just played thirty-six holes on a hot August afternoon.

“Would you like a lift to the clubhouse, sir?” he offered, comprehending now that I wasn’t a crazy old guy trying to crash the gates.

I shook my head, saying I wanted to walk onto the famous Augusta golf course. It was for sentimental reasons, I explained, but still the guard frowned. Who’d ever heard of a Masters qualifier wanting to walk down Magnolia Lane?

I thanked the guard, swung my bag onto my shoulder and, on foot, followed the limousines through the iron gates of Augusta National, the citadel of golf in America. I knew it was the home of legends. What I never dreamed was what the legends would mean to me.